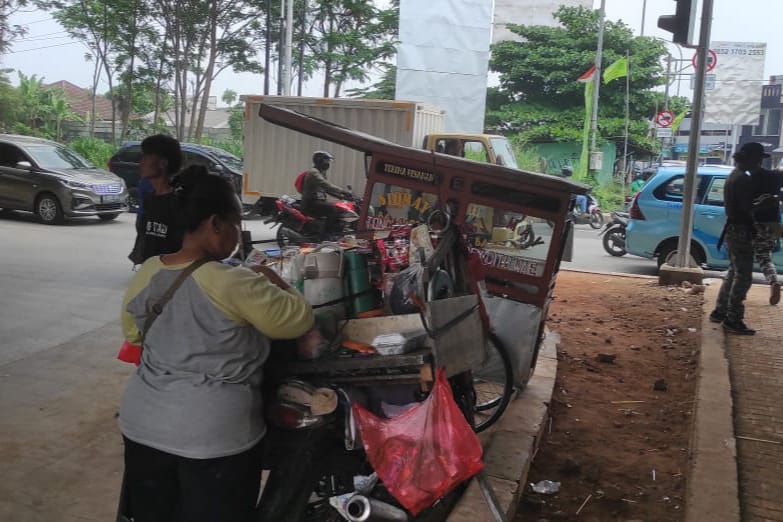 Tamara Beneradet Reken, a 54-year-old woman often earns a living with her colleagues at the Intersection of Jalan Gaplek, Pamulang, South Tangerang, Banten. Tamara admitted that she was desperate to become a silver woman after being fired from her workplace due to the Covid-19 pandemic.

The Minister of Social Affairs, Tri Rismaharini, who knew about Tamara's viral story, immediately gave directions for a needs assessment to be carried out on Tamara so that the appropriate Social Rehabilitation Assistance (ATENSI) service could be planned to overcome the crisis she was facing. The head of the Jakarta Melati Center, Romal Uli Jaya Sinaga, assigned social workers to find Tamara and then carry out a needs assessment.

Thursday (10/9), the team from the Jakarta Melati Center has not been able to find the whereabouts of Tamara, who usually “works” under the Gaplek flyover, Pamulang, Banten. The team coordinated with Suara Karya media reporters and received information on assistance from the Public Relations Bureau of the Ministry of Social Affairs to locate Tamara. Friday (11/9) at around 12.00 WIB, officers managed to find Tamara and conduct a needs assessment on her.

Based on the results of the assessment, it is known that Tamara migrated to Jakarta in 1980. She and her colleagues formed a musical group and until 2013, Tamara's musical group managed to perform in several cafes in the capital city. In 2014, Tamara switched professions to sell Japanese bamboo around Lebak Bulus Terminal.

“I have been selling Japanese bamboo for a long time, until early 2020. Due to Covid, it was very quiet at the terminal. No one wants to buy it. I need to eat. Well, it can't be helped, I tried my luck being a silver man. People say I'm lazy to work, I'm still young but begging. They don't know my life story," said Tamara.

"I used to sleep on the street, sir. Why are you ashamed? If we are ashamed, we will not live. So being a silver woman, I can earn up to 300 thousand a day. I have never received any help from the government. It's difficult to get the vaccine because the ID card is lost. It's hard to make the new one," complained Tamara.

Tamara admitted that she had felt pain all over her skin due to the effect of silver human paint. But she had no choice. No one wants to give her free help.
The team provided a Psychosocial Support Service (LDP) for Tamara. They explained the dangers of using paint on the body which can have long-term adverse effects. This is because the chemicals contained in the paint can seep into the skin and are carcinogenic. This triggers cancer and severe skin irritation due to the use of the paint.
The team finally managed to convince Tamara to switch professions so that she would no longer be a silver woman and live a vagrant life on the street. Monday (13/9), Tamara is planned to be escorted to Melati Center of Jakarta to receive Residential ATENSI services.
A business unit has been prepared for Tamara at the ATENSI Creation Center (SKA) of Melati Center Jakarta so that Tamara can start entrepreneurship and overcome the crisis she faces. Melati Center also facilitated the process of obtaining a new ID card and registration for the Covid-19 vaccination for Tamara.