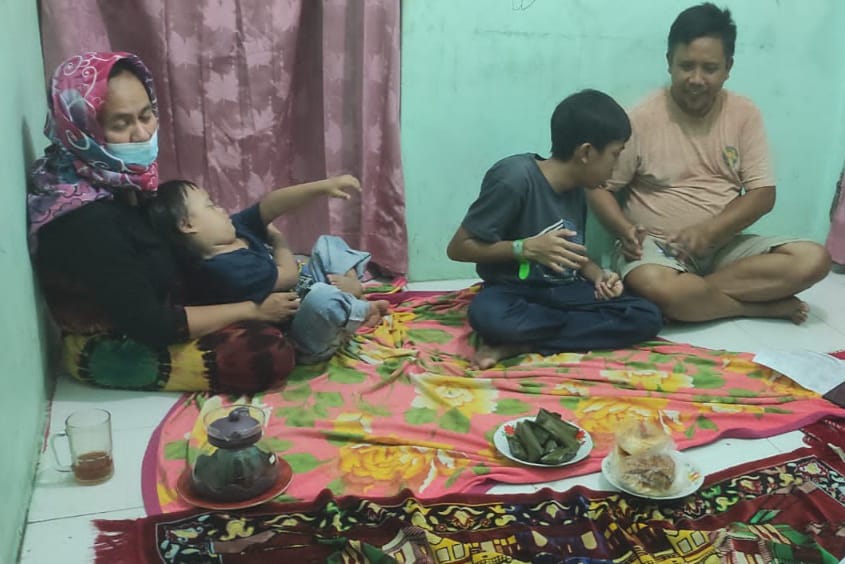 Previously, Nazaruddin Edo, the father of Rafly and Aznan, sent a letter to the Minister of Social Affairs submitting a request for assistance for his two children who are experiencing a crisis due to their disability. “Melati” Center was appointed to follow up on the direction of the Minister of Social Affairs, Tri Rismaharini, to immediately conduct a needs assessment of Rafly and Aznan.

Head of Melati Center, Romal Uli Jaya Sinaga, assigned social workers and social rehabilitation assistants to carry out a needs assessment for Rafly and Aznan and their families on Friday (17/9).

Rafly Zam Zami (16 years) was born with problems with his spine. Rafly has not been able to speak until now. His hearing function was diagnosed as normal based on the results of a doctor's examination. When he was 4 years old, Rafly could only walk.

Since the age of 2 years, Rafly has attended therapy at Fatmawati Hospital and attended the Fatmawati Special School (SLB) until the 6th grade of elementary school. However, he quit school because he often had a fever after school. According to his parents, Rafly's condition is now much better. He was able to eat, bathe, pray and play alone. Previously each of Rafly's motor activities had to be assisted by his parents.

Aznan Lilo is Rafly's younger brother. Lilo is 5 years old who was born with abnormalities in both legs. The Lilo hospital was diagnosed with Congenital Talipes Equinovarus (CTEV) or clubfoot and also Down syndrome, a genetic disorder that causes sufferers to have low intelligence levels and distinctive physical abnormalities.

When Lilo was 6 months old, he had severe seizures. Until now, Lilo is taking medication for epilepsy. In 2018, Lilo is planned to undergo surgery so that both of his legs can function normally. However, Lilo had seizures and a high fever so the doctor did not permit the operation. Until now, the family has not brought Lilo to the hospital for control due to the Covid-19 pandemic.

To the team, Rafly and Lilo's parents told that their family had been living in a rented house for a long time. Rafly's father worked as a raw seafood trader, but his income dropped drastically during the pandemic. Often their merchandise does not sell and there is no income at all for their families.
"It's getting harder and harder to find money now. I have never received help even though other neighbors have already received it. That's why I dare to send a letter to the Minister. Maybe my complaints are noticed," said Nazaruddin.
Based on a needs assessment, the Head of the Melati Center approved a follow-up recommendation to provide Social Rehabilitation Assistance (ATENSI) support to Rafly, Lilo, and their families. Melati Center Jakarta will provide ATENSI support in the form of fulfilling basic nutritional support needs, namely milk and diapers.
In addition, Rafly and Lilo's data will be submitted in the Integrated Social Welfare Data (DTKS) and facilitated by BPJS management to facilitate Rafly's therapy costs which include Physiotherapy, Speech, and Occupational Therapy, as well as Lilo's therapy which includes Physiotherapy and Occupational Therapy. Melati Center also provided entrepreneurship ATENSI support for Rafly and Lilo's parents to develop a seafood sales business and open a food stall in front of their house.