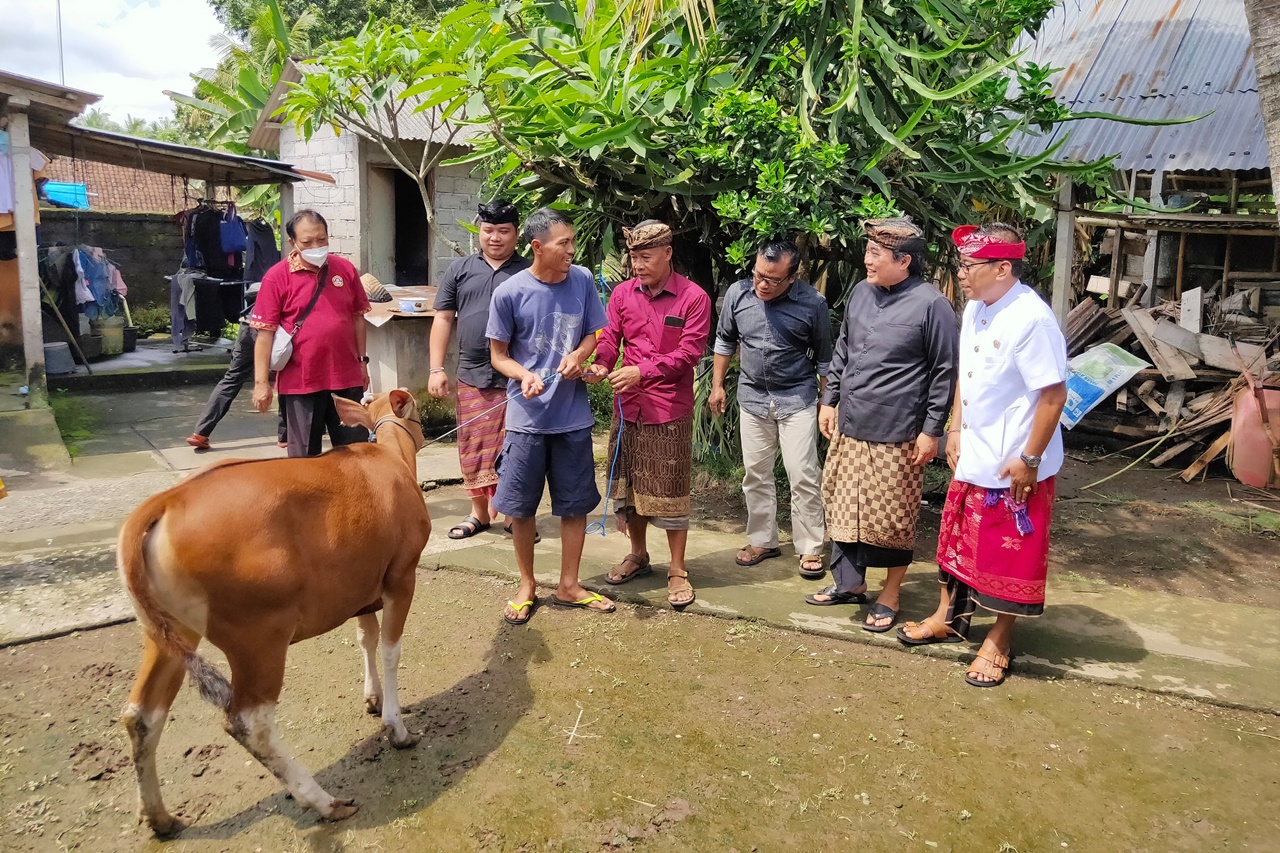 GIANYAR (November 6, 2022) - Together with Member of Commission VIII DPR RI, IGN Kesuma Alit Kelakan, the Ministry of Social Affairs through Mahatmiya Center Bali handed over Social Rehabilitation Assistance (ATENSI) in the form of cattle entrepreneurship to families of stabbing victims of people with mental disorders (ODGJ) in Gianyar Regency and laptops for Troubled Indonesian Migrant Workers (PMIB) in Bangli Regency.

Previously on August 18, 2022, Dewa Gede Gunastra (43), a resident of Pejeng Kelod Village, Gianyar, Bali, was suspected of having ODGJ go berserk and committing acts of violence by injuring 3 residents and abusing 1 elderly to death, namely Dewa Ketut Alit (72) who is a breadwinner.

Also present at the handover of the aid was the Head of Mahatmiya Center Bali, Sri Wibowo, Gianyar Regency Social Office representatives, and local village officials. Assistance for cattle worth IDR 7,700,000 is expected to be able to be developed and become a business to support the family's economy.

Next, the ATENSI distribution continued to Bangli Regency. This time it targeted PMIB, a victim of fraud and undocumented harassment in Turkey, Ayu Vira.

She was sent home by the Ministry of Foreign Affairs on 24 August 2022. She was picked up at Ngurah Rai Airport by Acting Director of Victims of Disasters and Emergencies I Ketut Supena, Member of the Indonesian Parliament Commission VIII Alit Kelakan, and Head of Mahatmiya Center Sri Wibowo. Since her return, Ayu has been treated at Bali Mandara Hospital and continues to recover at her home.

Delivery of ATENSI assistance in the form of a laptop worth IDR 7,500,000 is a follow-up to the results of an assessment of the response to cases that have been handled by the Center.

IGN Alit Kelakan in his remarks said that Commission VIII of the House together with the Minister of Social Affairs constantly absorbs the aspirations or complaints of the people. "We at Commission VIII together with the Minister of Social Affairs, who is currently represented by Mr. Wibowo, always absorb the aspirations of the people. We will respond quickly to reports from the public," said Alit Kelakan.

The Head of Mahatmiya Center Bali, Sri Wibowo also said that this was a form of the government's presence in the community.

"We will follow up on a case. This step is a form of a collaborative effort between the central government and Commission VIII DPR RI in carrying out Social Rehabilitation Assistance (ATENSI) activities. This is an extraordinary synergy," said Wibowo.