Become a Companion to be Useful 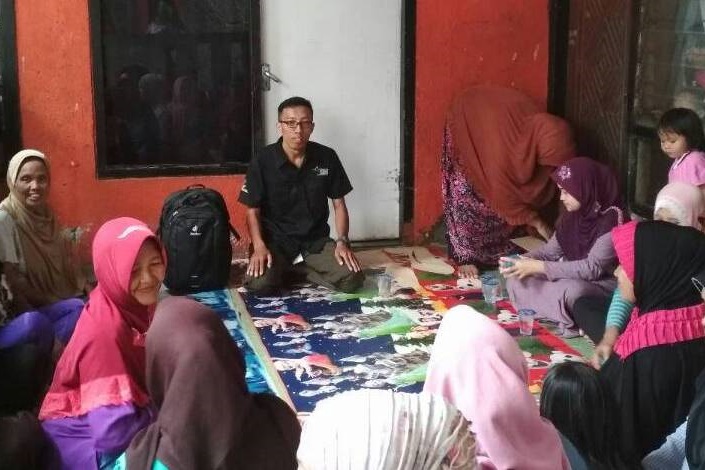 Gigondola Sugiri has been a companion to the Family Hope Program (PKH) for nine years. As a result, now the fostered community in Cikaret Sub-district, South Bogor District, Bogor City is not only empowered but also "free" from the shackles of poverty.

Gigondola Sugiri's determination was unanimous. He wants his life to be useful for others. For this reason, in 2008, this man who was born in Bandung, West Java, decided to become a companion to the Family Hope Program (PKH). "I became more concerned with the fate of others," he said.

Poverty is still a complicated problem that must be faced by the Cikaret community. The facilities and infrastructure were nowhere near decent. "Fortunately, my assisted location is not far and still reachable," Sugiri recalled.

Nevertheless, Sugiri was grateful now. Since the launch of the Family Hope Program, the community in the Cikaret Village has become increasingly empowered. Various social facilities have also begun to be built, though there is no electronic media. According to Sugiri, electronics are very much needed as a supporting medium for group meetings. The existence of electronic media will make citizens interested in joining the program.

Sugiri said that the families he accompanied were indeed mostly from disadvantaged groups. He regretted that their awareness to rise from economic downturn is still low as they still rely on and hope for government assistance.

Even so, Sugiri still feels glad because the PKH program has helped many people from the economic burden. "Thank God, many people have been helped by the existence of PKH, so that they can reduce their expenses," Sugiri said proudly.

Nine years to be a companion certainly filled with joy and sorrow for Sugiri. One of the most memorable moments for him is when he had to be a guardian of a marriage. At that time, one of the KPM (beneficiary family) mothers wanted to marry his son. However, the father was not there because he worked outside the city. As a result, Sugiri was also asked to propose and marry the son of the KPM mother.

Another interesting experience for Sugiri is when a KPM mother who had to give birth. Strangely, the mother is looking for Sugiri instead of her husband to drive her to the hospital. Sugiri has also accompanied KPM children who suffer from high-stage cancer. "I went back and forth to the hospital to take the child," Sugiri said.

So far, according to Sugiri, the PKH program has been going well. Coordination with both operators in the sub-district and Ministry of Social Affairs are also no problem. However, the implementation of the distribution of social assistance through non-cash system still found a number of problems because the system has not been maximized. Therefore, there is a lot of data error.

Other obstacles are the community who is not familiar with technology. This is due to the low quality of human resources. "Imagine that when they go to an ATM, sometimes they have to be escorted by a companion," said Sugiri who is often called Gigin.

In the future, Sugiri hopes that the PKH program must be able to work together with other parties, such as zakat institutions. The goal is to be able to work together and support each other in reducing poverty. According to Sugiri, community-based poverty alleviation needs to be developed. One of them is by cross-subsidizing the management of zakat. Therefore, the effort to reduce poverty does not only depend on the government but also involves community participation. "The community must be able to take a role in helping to alleviate poverty," Sugiri said.

As for the assistants, Sugiri, hopes that they will instill not only the employee spirit but also a spirit of volunteerism. Sugiri envisioned that if PKH can work together with zakat institutions and their companions have high voluntary spirit, it will likely become a great force that can help the government in accelerating poverty reduction in this country. Hopefully.