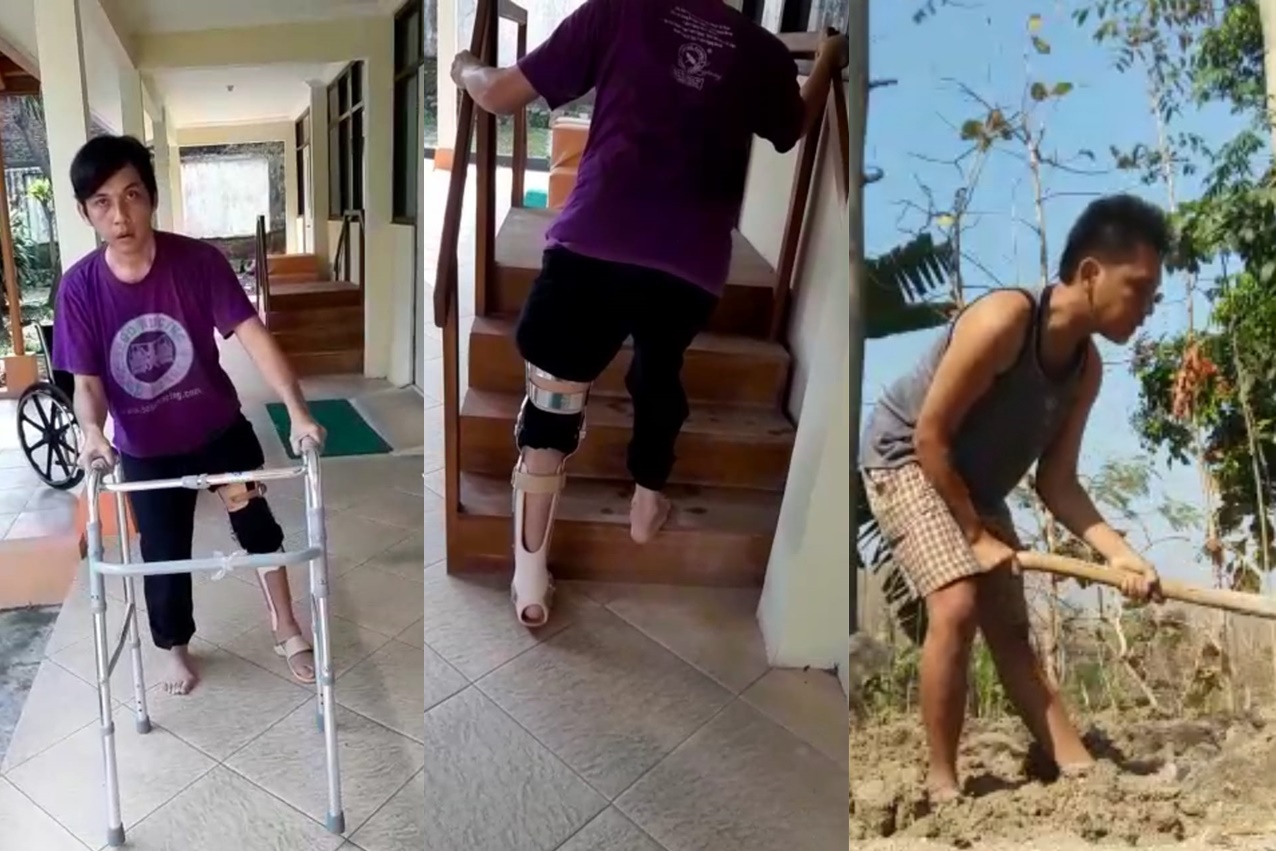 Under the heat of the sun, Darmanto, a 23-year-old young man from Ngawi who is also a former Beneficiary (PM) of the Social Rehabilitation Center for People with Physical Disabilities (BBRSPDF) "Prof. Dr. Soeharso" Surakarta gave a happy smile. Even though he was bathed in sweat he was still passionate about helping his father dig the garden.
By occasionally wiping his sweat, Darmanto recalls the time when he underwent rehabilitation in Solo. This optimistic young man took VAK (Visual, Auditory, and Kinesthetic) hand skills while undergoing the rehabilitation process.
Who would have thought, the figure of Darmanto with a physical disability with a type of Cerebral Palsy disability can now walk without tools. Cerebral palsy is a disorder of movement patterns caused by damage to the brain and occurs in the developmental phase of the brain, both before, during and after birth.
The movement patterns experienced by Darmanto occur in the left leg. His left leg is not patterned, where the function of the leg is to support his weight when walking. But, experienced by Darmanto is that every time he uses the soles of his feet to walk it will always be followed by movements that are not controlled by the brain, so that the soles of the feet will always bend, tiptoes and knees cannot be in a straight position. As a result, Darmanto could not stand tall and could not walk. So he walked by bending his knees and the position of his feet on tiptoe.
In such conditions, Darmanto received physical therapy at BBRSPDF "Prof. Dr. Soeharso" which is the responsibility of the Installation of Revalidation Treatment (IPR) as one of the units consisting of orthopedic doctors as consultants, general practitioners, nurses and physiotherapists.
In the first treatment by the medical team, Darmanto received Orthose, a tool that functions to position the legs in a fully straight state. In addition he also gets mobility aids in the form of Walker and then routinely gets physical therapy every day by physiotherapists in the form of programmed movement patterns. The goal is to instill a pattern in the brain about the function of the left leg as a body buffer.
The form of therapy in the form of exercise every day for at least one hour, among others, to stand up straight, support the weight with the left leg assisted with Orthose and walking using Walker. In addition, Darmono also received assistance from Social Workers to conduct independent exercises in the dormitory.
During the three months of intense and disciplined training, Darmanto has felt the results. With sparkling eyes, he can walk using the Walker tool without the help of others. Furthermore, within eight months Darmanto proceeded without tools. Until it's time to terminate, Darmanto is provided with a home program in the form of motion exercises that must be done independently at home.
After being at home for two months, Darmanto seemed to want to shout to the world that disability was not an obstacle to work. In fact, he can now prove that after receiving a comprehensive rehabilitation program at BBRSPDF "Prof. Dr. Soeharso" Surakarta.
"After undergoing therapy at Balai, I feel more confident and able to carry out social functions and roles without being hampered by physical imperfections," Darmanto said.
Not to forget, Darmanto was very grateful for the opportunity given to take part in the rehabilitation program because now he was able to walk without tools and could even hoe, an activity he had never imagined before.