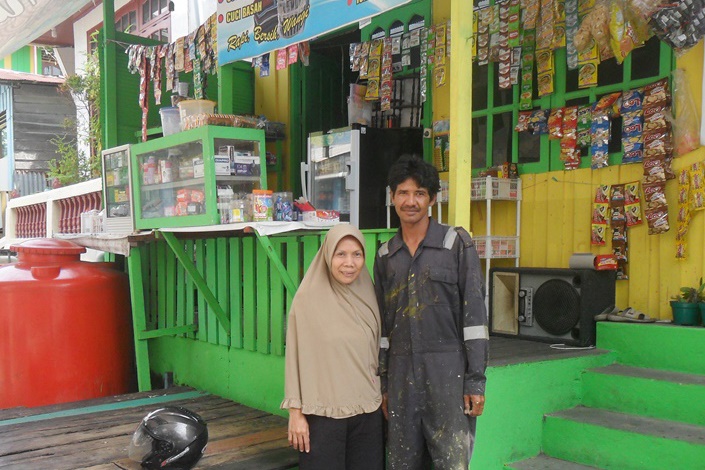 The sun shines fiercely overhead. Along Jalan Letjen Soeprapto in the busy area of ​​Balikpapan City, private cars race quickly with microbuses and motorbikes. On one of these busy roads, Kumalasari started to arrange her chicken noodle stands, assisted by her faithful husband Suwarno. Click, the gas stove starts. The broth in the boiler starts to stir.

Spices and vegetables are laid out to fill the bowl, which then moved so it can be grabbed by hand. Correspondingly, loyal customers began to arrive. There are people who order the chicken noodle without soup, some use meatballs, some without chilli sauce. Kumalasari serves them diligently, patiently and kindly. A pair of woman's hands who was born October 3, 1972 began to move swiftly.

The empty bowl is filled with the seasoning. Noodles that are a bit soft from the boiler, are mixed with the spices. Chicken dough, chopped green onion, and chili sauce are served if someone asks for it, as well as filling the tight bowl space.

Tens of chicken noodles bowl can be sold in a day. Kumalasari's cooking are suitable for many people. Her customers keep increasing.

"My husband assists me to sell the chicken noodle from 13.00 to 17.00. There are a lot of customers, sir. Well, the profit is not bad," said this elementary school-graduated woman. The income earned is quite promising as well.

As an illustration, the house that was occupied in Balikpapan with family, was bought in part from the results of the Jakarta Chicken Noodle - the name of Kumalasari's chicken noodle shop.

Unfortunately, those happy times did not last long. The development in this oil city demands the arrangement of the city here and there. In 2015, the spot where Kumalasari's Jakarta Chicken Noodle was located became the target of the city structuring location. The city government is widening the road so that Kumalasari's food stall will no longer have a place.

The sun above the head, which always accompanied Kumalasari while arranging the chicken noodle stalls, suddenly seemed to fall appart. The world was dark and spinning. Obviously this was a hard blow in Kumalasari's life.

Income no longer exists. Living costs cannot be deferred. The bill from the bank also continues. The situation is very difficult and life is like being in a labyrinth where the way out is unknown. The business that Kumalasari relied on is closed. Payment at the bank is also stuck. Unpaid bills made Kumalasari declared bankrupt.

"The situation is very difficult, sir. No earnings. The bank finally stated that we were bankrupt because we were unable to pay the bills," Kumalasari said.

Luckily, this married couple is still blessed with faith and piety. Surrender to Allah SWT, both of them are endlessly asking and praying, holding to the hope of given guidance and protection.

Besides prayer, Kumalasari and her husband's endeavor also continues. Without giving up, the couple keep trying to find a way out. "Chicken noodle business was not continued in different places because we didn't see a strategic location," Kumalasari said.

Both of them are in a difficult situation for about a year. Until then in 2016, the new light has appeared

In 2016, Kumalasari obtained a loan capital from his brother of Rp 3,000,000. "We used the loan money to sell at school but it didn't happen," Kumalasari said.

Kumalasari did not invest the loan proceeds to sell at school because there was no staff to help and the terrain from the house to school was quite difficult as it located at near the mountain.

The decision regarding the money has finally been taken as it is used to buy a washing machine and start a laundry business. There are no special considerations with this decision, other than just a mere trial and error.

"One of our brothers also has a laundry business. The business has received a good response from the surrounding community," said Kumalasari who is also the mother of two children.

In addition, the laundry business can be done at home so that it is more efficient and profitable that it doesn't need to rent a place. Kumalasari's calculation is right.

With the cost of Rp 6,000 / kilogram, the laundry business is in demand by the community due to Kumalasari's friends and relatives who later become the customers. Furthermore. the quality of Kumalasari's laundry is also high-quality among the densely populated areas.

"There is a KPM PKH who assists me to iron clothes. Now the profit obtained from the laundry business is up to now Rp2 million net every month," Kumalasari said.

Besides the laundry business, Kumalasari also started selling groceries in 2018. "This business was built by lending loan capital in the form of goods such as rice, vegetable oil, garlic and others," said Dewi, Kumalasari's companion for Family Hope Program (PKH).

The loan repayment is paid in installments every week. Kumalasari already paid  it off before Eid in 2018.

The profit of selling groceries are spent again to buy a variety of children's snacks, electricity payment businesses, credit purchases, cable tv, BPJS Health through the application. A banner written 'Warung Belle' is attached in front of the stall to make it recognizable. "It is because I've always been called as Belle," Kumalasari said.

Kumalasari's participation in the PKH program began in 2017. "PKH assistance is used to afford my children 's school supplies and savings, as well as increasing the business capital," she said.

Until now, Kumalasari often receives orders for chicken noodles and meatballs when there is a celebration to visit her residence. Alhamdulillah, due to the hard work and perseverance of Mrs. Kumalasari and her husband's assistance in entrepreneurship made them prosperous and independent. (News material: Subejo/Dewi Arumsasi)